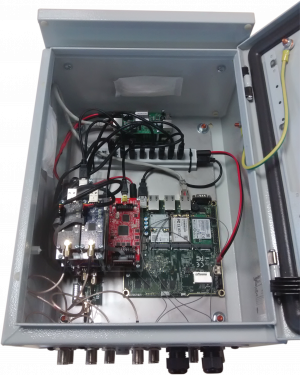 The electronics of the City of Things experiment nodes

There is currently only a single type of node available in the City of Things testbed. It consists of of an apu2c4 embedded pc with two WiFi interfaces and a number of additional radio modules that are connected through USB. Depending on the specific node, it supports the following technologies out of the box:

An overview of which nodes are equipped with what hardware can be found here.

Each node uses a PCEngines apu2c4 board as a central controller. This board is equipped with the following hardware:

The apu2c4 is also equipped with two of the following WiFi cards. See this page for a list of which hardware is present in each node.

The OpenUSB board used in the experiment nodes

The OpenUSB mote consists of an OpenMote-CC2538 connected to an OpenUSB base board. It has the following features:

Please note that the JTAG debugger is (1) only supported in windows, (2) not required to flash/erase the OpenUSB mote and (3) only present to allow the system administrators to recover bricked OpenUSB motes. Flashing / Erasing the OpenUSB mote is done through the serial port. See the OpenUSB Tutorial for more information.

The 433Mhz EZR USB board used in the experiment nodes

The 868Mhz EZR USB board used in the experiment nodes

Please note that, for security reasons, the USB-port of the EZR USB is not connected to the host. Communication with the EZR USB module is only possible over the serial interface.

The Lora module used in the experiment nodes

LoRa(WAN) connectivity is provided through a EFM Giant Gecko development board connected to an RFM95W LoRa tranceiver. 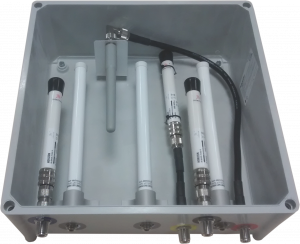 The antennas of the City of Things experiment nodes

Each experiment node is equiped with a number of different antennas (10 in total). These antennas are housed in a separate plastic enclosure to ensure that the placement of the antennas is consistent. Each radio interface is connected to one or more antennas using low loss coax cable. Depending on the operating frequency of the radio interface, a different type of antenna is used.