At this point, the CityLab testbed only has limited support for automatically creating links between nodes using the JFed interface. Standard IP-in-IP GRE Tunnels and Ethernet-in-IP GRE Tunnels (gre-tunnel and egre-tunnel links in JFed) are supported. Adding support native Ethernet links (lan links in JFed) is on our TODO list. Since both 'gre' and 'egre' tunnels are point-to-point tunnels it is currently not (yet) possible to create a JFed-link with more than two connected nodes. As a workaround it is possible to bridge multiple 'egre'-tunnels together into a single (tunneled) L2-network once the test has started.

This page provides a quick How-To guide on how to create standard 'gre' or 'egre-tunnels' in JFed and then explains how to manually set up and bridge egre-tunnels manually (after the test has started).

Creating Links between nodes through the JFed interface

Creating Links between nodes through the JFed interface is very straightforward and can be done as follows:

No more than 2 nodes per link

It is not possible to create (E)GRE-links with more than two nodes. The JFed GUI does allow additional nodes to be added to the link, but when the test is started the link will only exist on two nodes. This limitation is caused by the fact that the GRE-protocol only supports point-to-point tunnels. It is possible to set up and bridge multiple egre-tunnels, but this cannot be done through the JFed interface.

To enable support for 'egre-tunnel' links, a few tweaks had to be made to the 'client-side' emulab-tools installed in the testbed disk images. Since these tweaks are not (yet) incorporated in the upstream emulab-code base, they are also not present in the many emulab-images used around the world.

We have added these tweaks to the 'CoT' disk-images of the CityLab testbed (see Disk Images), so if you want to use egre-links you must use a 'CoT' disk image.

The way JFed normally adds impairment to a link is by adding a so-called 'impairment node' in between the nodes of a link to change the properties of the traffic flowing over the link. This mechanism however only works with ethernet interfaces and not with GRE Tunnels. That being said: it is possible to add link impairment to GRE tunnels manually. How to do so is explained below.

Important: although it is possible to manually set up GRE-tunnels it is much easier to do so through the JFed-interface. The only reason for creating them manually is to create a 'link' between more than two nodes or to create links with nodes of another testbed (both of which are currently not supported through JFed)

A number of scripts are provided to make it as easy as possible to create and manage EGRE-tunnels. Before any EGRE-tunnels can be created, these scripts first need to be installed on every node. This can be done by running the following one-liner:

A simple link between two nodes.

A simple GRE tunnel can be created by running the gre_add_tunnel script on both nodes.

The setup shown in the example on the right can be created as follows:

In the above commands link0 is the name of the interface to create and apuX is the host to create a tunnel to. The optional -c flag can be used to automatically configure an IPv4-address on the newly created interface.

To allow the node names configured in JFed to be used to configure GRE tunnels, the gre_add_tunnel script tries to behave somewhat intelligently when resolving hostnames:

Once the GRE tunnel is created, it can be used just like any other Ethernet interface, except that the MTU is a bit lower than normal.

Removing the tunnel is done using the gre_del_tunnel script. To remove the tunnels created above for example, the following command would have to be run on each node: 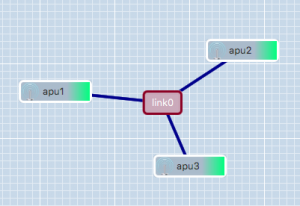 A slightly more complicated link between more than two nodes.

Creating a link between more than two nodes is (slightly) more complicated since GRE only allows Point-to-Point tunnels to be created. To work around this, GRE Tunnels are created from one 'central' node to all other nodes on the link. These GRE Tunnels are then 'bridged' together on the central node to form a shared subnet. Such a 'GRE Bridge' can easily be created using the gre_add_bridge script.

The 3-node setup shown in the example on the right can be created as follows:

In this case apu1 is used as the central node and apu2 and apu3 connect to it in exactly the same way as in the two node scenario.

Once the 'GRE Bridge' has been created it can be used just like any other linux bridge. Additional interfaces can be added/removed using the brctl command. The bridge's stastus can be queried using the brctl show command:

In the above output, the link0_gre_x interfaces are the GRE tunnels to the individual nodes.

Removing the 'GRE Bridge' is done using the gre_del_bridge_script. It is highly recommended to use this script to remove the bridge (rather than the brctl command) as this script not only removes the bridge itself, but also cleans up the GRE-tunnels to the individual nodes.

Once the 'GRE Bridge' has been removed, the GRE-Tunnels on the other nodes also need to be cleaned up. This is done in exactly the same way as in the two node scenario:

GRE Tunnels are identified solely on the source and destination IP-address of the encapsulating packet. That means that it is not possible to establish two independent tunnels between the same two nodes at the same time.

For the two node scenario, this means that only a single link can be created between two nodes.

For the mutliple nodes scenario, a node can participate in multiple links as long as:

It should be noted however, that GRE Tunnels can be used in combination with VLAN-tagging, so if you really need to create multiple links between two nodes, you can do so by defining multiple VLANs on the GRE tunnel interface. This however is not something that can be done using the scripts provided here.

Using a GRE Tunnel incurs an overhead of 38 bytes. This is because the original Ethernet packet needs to be prefixed with an additional IP- and Ethernet-header in order to send it to the other tunnel endpoint. To prevent fragmentation, the linux kernel automatically reduces the MTU of the GRE-interface. As a result, the MTU inside the tunnel is 38 bytes lower than the MTU outside the tunnel.

Except for a small decrease in performance this usually is not that big of a problem, with one notable exception. When, for instance, a WiFi AP-interface is bridged to a GRE Tunnel, the MTU is set to the smallest MTU of the 'slave' interfaces (in this case the GRE-tunnel). This lower MTU however is not automagically communicated to the connected WiFi clients and as a result these clients may still send packets that are larger than the MTU of the bridge. Since these packets are subsequently dropped by the linux bridge, this can lead to all sorts of nasty problems. The most common of which are dropped UDP packets and TCP sessions seem to work fine and then suddenly hang when more than a few bytes at a time are sent over them.

To resolve this issue the MTU of the other WiFi clients should be reduced to the MTU of the linux bridge. When static IP-addresses are used, this can easily be done using the ip link command:

If DHCP is used, the lower MTU should be advertised by the DHCP server.

Setting up EGRE-Tunnels Citylab and the Virtual Wall

At this point it is not possible to set up 'multi-site' (e)GRE tunnels through the JFed interface, but it is possible to do so manually after the test has started. The process of doing so is very similar to manually creating EGRE-Tunnels within the citylab testbed itself, but the following caveats need to be taken into account: 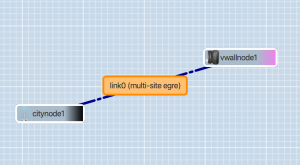 A point-to-point (E)GRE tunnel can be created using the gre_add_tunnel script on both nodes.

The setup in the example on the right can be created as follows:

The gre_add_tunnel commands shown above are very similar to the ones used to set up an EGRE-tunnel between citylab nodes, but there are a few important differences:

Instead of specifying the FQDNs of the nodes, it would also have been possible to specify the public IP address of the node directly but this is more cumbersome and error prone (especially when using IPv6). Once the tunnel has been created it can be used just like any regular Ethernet interface except that, once again, the MTU is somewhat lower.

As before, removing the tunnels is done using the gre_del_tunnel script: 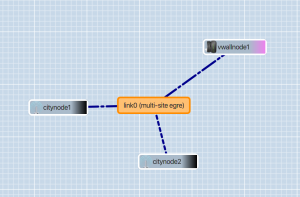 A multi-site link with three nodes. 'citynode1' and 'citynode2' are Citylab nodes. 'vwallnode1' is a node on the Virtual Wall testbed.

As with GRE links between citylab nodes, setting up a GRE-link with more than two nodes is done by:

When such an 'overlay subnet' spans multiple testbeds however, it is important to select the 'central node' very carefully. Consider for example the topology shown on the right. In this case a link is created to which two nodes of the citylab testbed and a single node of the virtual wall are connected. If, in this case, vwallnode1 were to be selected as the 'central' node, then all traffic between citynode1 and citynode2 would be sent over the virtual wall testbed unnecessarily. While in this case it would therefore be better to use citynode1 or citynode2 as a central node, for other test-setups the 'central node' to use may not be so simple to determine.

The 3-node setup shown in the example on the right, with citynode1 as a central node, can be created as follows:

Once the 'GRE Bridge' has been created it can be used just like any other linux bridge. Removing the 'GRE Bridge' is done in exactly the same way as it is done for a 'local' GRE Bridge. See this section for more information.

Adding impairment to a link is done by running the following command on each node connected to the GRE-tunnel:

As an example, the following command adds a 20% loss, a maximum data rate of 35mbit and a 7.5ms delay to link0

Important: The link impairment configured with the above command only affects packet that are sent from the host. Received packets are unaffected. Therefore it is imperative that you configure the same link impairment settings on both nodes connected to the GRE tunnel.

To change the impairment settings on a link, you first need to remove the link impairment all together and then add it again with the new settings.